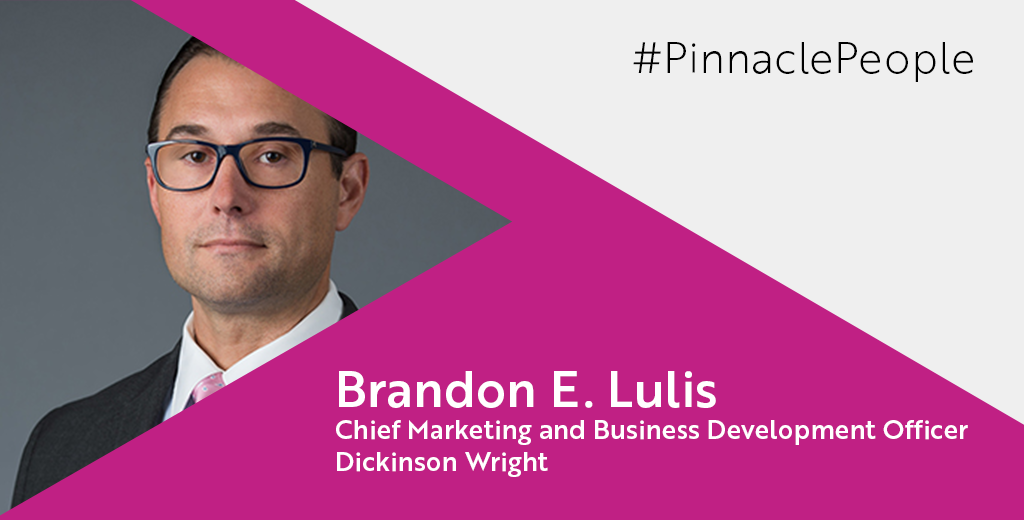 To be completely honest, I was worried about how my half an hour with Brandon Lulis was going to go. Having looked him up on the firm’s site and LinkedIn, Brandon clearly seemed like a man who means business. There are no photos of him smiling – instead, you’re greeted with a cool expression that says, “I’m here to get things done.”

But frankly, nothing could have been further from the truth. Brandon is a warm, engaging, passionate person who is generous with his time and fascinating to talk to. He is the first CMO I’ve ever met that does not come from a marketing or BD background, and it makes for a unique approach.

Coming from the outside, and having been to law school himself, Brandon is able to seamlessly connect different approaches, philosophies, and departments, which has allowed his team to harness the power of data – empowering them as professionals.

Tell me about your journey to CMO.

“As a political science major as an undergrad, law school was always on my radar, but it’s a bit of a funny story how I ended up there. I was on the fence about whether I should go to law school or business school. Looking for an outside perspective, I asked my wife’s uncle, who has his JD and MBA and at the time was the current president of a Fortune 500 company. He recommended I get a JD first. He said that if you go to business school first, you’ll never go to law school and law school helps you become more analytical; it teaches you how to interact with an array of people.

So I followed his advice. I knew early on in law school that I did not take a liking to the amount you had to write, legalese-wise, knowing that there has to be a level of passion for such writing to be successful, but I finished it before later moving on to my MBA. While in law school, I was working for a company hired by Ford Motor Co to complete legal discovery work.  Soon after that, I was hired by a local law firm dealing with the Ford Rouge Plant.  I began a career in law firms but always viewed the work a bit differently.  Within the tight knit community of Detroit, individuals I worked with were golfing buddies with the then CMO at Dickinson. He said he needed somebody to do analytics, build teams, and manage, and my name was given to him.

The CMO of Dickinson at the time was Jack Oliver. I had what I thought was just going to be a simple coffee meeting with him, but it turned into an interview with a couple of attorneys. And that’s how I started at Dickinson. I began with the firm completing business analytics, which morphed into competitive research – looking for who’s representing our clients or their opportunities. I built that into really getting involved in all areas of the firm: practice management, operations, a little bit of finance, and then marketing.

Very quickly, if there was a big project to get involved in or expansion, I became a kind of consultant. Individuals would come to me saying they’re looking to expand in a particular area and ask for my research and analytics.

Then, later on, the firm went through a transition of changing the hierarchy of how we operate. We had ten practice divisions, but they wanted to change to having only five divisions with multiple sub-divisions/practice groups within said groupings.

For a brief period of time, I was pulled out of marketing and oversaw director of practice management. I was acting as the chief administrative officer for the divisions, and when we had our new CEO take office, he asked me to take on being the CMO. We had some early concerns within the marketing department – our costs were overrun, in addition to budget and team management issues. But when the CEO asked me to be the CMO, I said I’d give it a shot. And very quickly, with the support of firm management, I built a team. And we’ve been killing it, I think, ever since. We’ve got a lot of new things that we were able to accomplish.”

How do you run your team?

“The unique thing is that I have a rule on my team. And that’s the one-call rule. When I first introduced this, they didn’t understand why this was so important to me. I said, whenever anybody – a secretary, assistant, a paralegal, or attorney – if they call anybody on my team, that’s the only call they make. I stressed that I believe in everyone’s ability on my team and place trust in that person’s responsibility to work within our team to get what they need or find what they need and respond. Because we as a firm are too large, and I think it’s too important for an attorney to be chasing stuff around with that potential of rising frustration level. That’s the one constant that you will always hear in law firms.

One of the ideas that I always promise is there has to be a level of concierge service, a professional level of understanding of their needs. A lot of times with attorneys, they want to be able to hand something off and not have to worry about it and get on with their work.”

Would you describe your philosophy as both a head and a heart approach?

“I believe the data in hand strengthens relationships. Here’s the thing, if you don’t have the analytics, you will stumble. They go hand in hand. The legal industry is complex and can become more complicated with new potential clients every passing day.  You have to understand the analytics of everything, both internally and externally, and how they impact each other.

What I mean by data is often not how a lot of the industry looks at it. It’s not ones and twos and threes. It’s language, its numbers, its analytics of relationships, and everything else. I consider data being the total package of everything. And for people to succeed in any industry, you have to be able to understand that data yourself and build a team around you who can understand that data as well.

I think that law school teaches you how to study, but it doesn’t teach you how to build relationships. It doesn’t teach you how to understand a business. And that’s where a lot of people run into trouble. Whenever I talk to younger individuals within the firm, whenever I do a presentation, I always say that my team is trained and understands that they have around 175 businesses they work for. There are 175 plus businesses underneath the firm umbrella because every partner is their own business. And if you can’t understand that, you’re going to fail.”

And with that, our time is up. There are a number of different philosophies that run through Brandon, and the fact that he is not of one camp allows him to really pull his team together. Something that he has really driven home is the importance of data; marketing cannot work in a vacuum, and understanding how everything fits together is vital for success.

A great unifier, Brandon is a CMO whose approach is founded on great service and common sense. It’s been fascinating talking with him, and I can only imagine that seeing him in action is a bit like witnessing precision engineering. It’s certainly given me lots to think about.