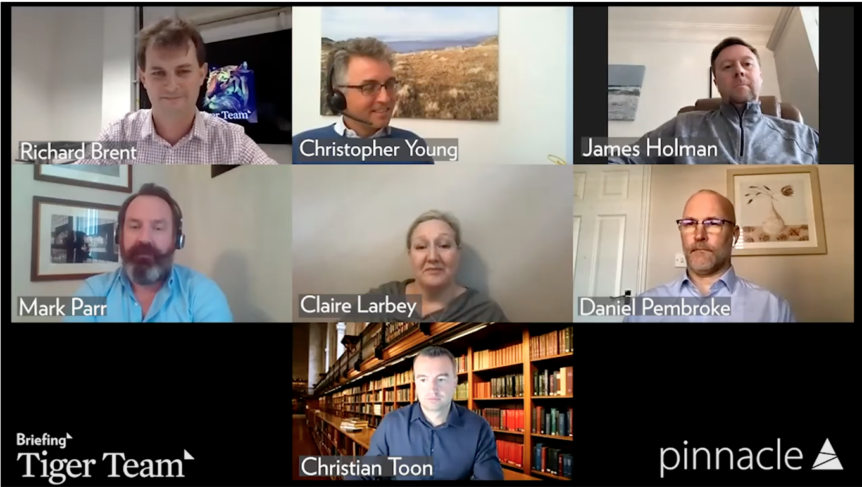 September saw the fourth and final Tiger Team convene as part of Briefing magazine’s summer series, in partnership with Pinnacle. Each session has set out to address the biggest challenges ahead for law firms and getting the tiger treatment this time was risk.

One theme that has been pretty much a constant of these Covid-dominating sessions popped up here too – and that’s the fact that in this extended business continuity test, law firms have acquitted themselves pretty well. So the evaluation of risk – across a swathe of scenarios – happened at pace, with decisions made promptly. No more languid three-month assessments – urgency and agility were very much to the fore.

There was plentiful discussion around the changing dynamics – and associated risks – of operating in a remote environment, for example the challenges around effective supervision, or operating securely and confidentially in a domestic ‘office’ space. And there was confidence too that process and systems – both existing arrangements and future plans such as electronic signatures and powers of attorney – will help underpin compliance and client working.

But the stand-out takeaway was the focus on the risk to people’s well-being. Law firms have always been fairly demanding masters and while mental health has lately taken its place on the HR agenda, it was good to see how everyone was very attuned to the fact that this current situation isn’t really easy on anyone.

There’s a clear trend of people working longer hours – taking their seat when they’d normally be leaving for the commute, and leaving their seat at the same time they’d have been getting home. Does that make them more productive? Is it desirable from a health and safety perspective? Are we giving them everything we can to help? There are those too who are struggling to justify breaking up their day with non-work activities, even if they are putting in more hours overall – maybe getting the work/life balance isn’t so easy after all?

Plenty of evidence as well that people are not so sure about returning to the office, and yet as a counterpoint there are those who are really missing the normal human interaction that goes on between colleagues who have a common mission and set of interests – and that a Zoom call can never truly replicate. And of course, the biggest difficulty for practice leadership, the fact that one size can never fit all: for every colleague of a mind and in a role that is loving remoteness, there’ll be another less suited and less enamoured.

Not managing such a nuanced and sensitive situation effectively could be a very risky game.

Click on the image below to watch the video