‘The man on a mission to integrate lawyers and marketing teams’, Chris Hinze 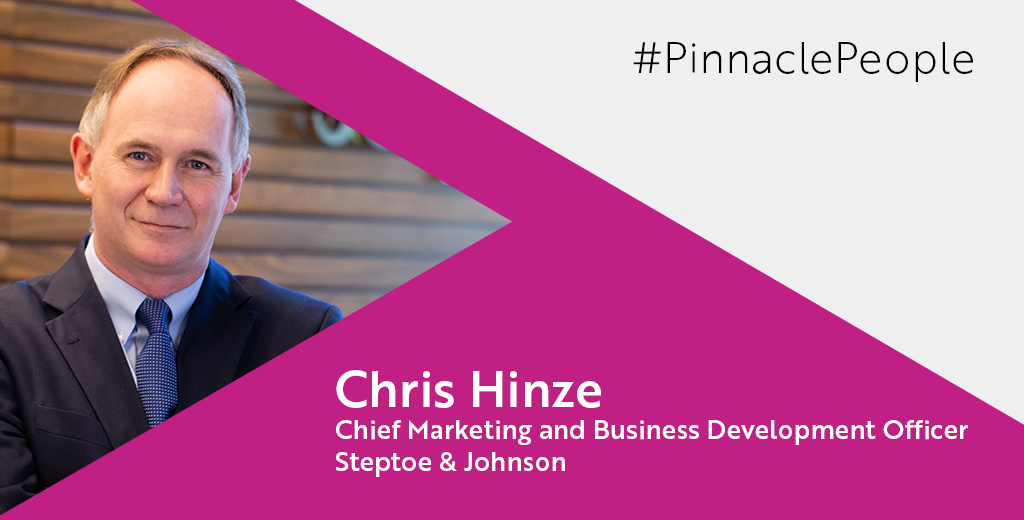 Speaking to Chris Hinze I quickly realise he’s a man on a mission to integrate lawyers and marketing teams, and quite frankly, I like his style.

In Chris’s world partners and the marketing team aren’t separate entities, in fact they work closely together, in order to get things done.

He’s down to earth, authentic, honest and had a refreshingly real take on how to run a marketing and BD department of a major law firm.

We spoke about this approach, what it’s like to move over the pond from the UK to the US and how Steptoe & Johnson is welcoming change with its first ever female chair.

What prompted you to move to the States after being with Hogan Lovells for 12 years?

“I’d been with Hogan Lovells for around 12 years in London, originally with the Lovells half and then all the way through the merger in 2010 and the post-merger integration. In 2014 we had a change in leadership, moving from two CEOs to one, and there then followed a period of globalizing and integrating the business services functions, including marketing and business development where we moved to a single CMO.

“There was a team of about 45 to 50 people handling communications globally, of which half were based in the United States and I knew the team there very well. The new CEO was US based as well as a number of members of the leadership in addition to half my communication team, so it made a lot of sense to move across.

“I had a chat with the CMO, the HR team and the Chief Executive and said, ‘Look, this would make a lot of sense. Does anybody have any objection?’ And they thought it was a great idea. So, I moved across, originally for a two year international secondment.”

It speaks volumes about the firm’s attitude towards integrating that you were able to do that. Do you think they have a desire to integrate?

“There was a lot of emphasis on the critical importance of a shared culture and ‘culture carriers’ transmitting that, both in terms of the firm’s culture and also the market and geographic cultures.

“After I’d moved across, one of the other Marketing & Business Development team members also moved over to DC to manage the corporate practice team, and she committed to two years to the US.  After a year, I found I really enjoyed working in the US full time and was able to convert my secondment to a permanent move. I got my green card, and settled more fully in. And here I am.”

After 17 years with Hogan Lovells Chris moved to a CMBDO role at Steptoe & Johnson in Washington, DC where he’s been since August 2021, I’m keen to find out what made him move after so long.

What do you enjoy about Steptoe and Johnson’s approach in particular?

“It’s a really exciting time for the firm, we have a new chair who started at the beginning of January 2022 and she’s the first woman to be chair of the firm and part of a new generation of leaders. We’re having conversations internally about the fact that the Steptoe a client may have used 10 years ago is not the Steptoe it is today. We’ve been on a really powerful reshaping of the firm under the previous chair which is continuing under the new one.

“I love that I’m back to doing that broad CMO and Business Development role and it is in a firm which is smaller than Hogan Lovells. In my team there are about 25 of us. Which means, you’re able to get back to having that grassroots knowledge and understanding of the individual practice groups and the individual partners, how they are working and thinking, and being able to work more hands-on with the BD side of things.

“The critical part is to be able to make that connection between the management and policy discussions that you’re having and what impact does that have for those operating on the ground. That’s the connection that I am getting back to.”

With a team of 25 people I’m keen to know how they operate.

How does the team sit down? Do you have BD and some Marcomms specialists?

“It’s a classic law firm M&BD team structure. We’ve got ten team members who are on the marketing communications and PR side. The rest of the function is structured to provide BD support to a combination of practice groups, a couple of special interest projects that we have, and then some international markets.

“That BD support is four vertical teams, each one headed up by a senior manager or director, and they will look after their own portfolio of practices so that they are embedded into them. That seems like a reasonably good way of allocating the resource.”

I’m interested in this structure as it’s not something I’ve heard of before for that size team, yet it’s a really clever way to do it.

Why did you choose to structure in that way?

“I’ve always been of the view that it is critical for team members have to have direct engagement and exposure  to partners. So I like this particular model, because I think it keeps people directly accountable and close to the partners in their particular practice groups, and it works the other way around as well. From the partners point of view, they know that those two or three people are their team that they work with on a regular basis and can really get to know them.  As opposed to a more anonymous and distant model of ‘someone in marketing’.”

And how does the team respond to that?

“From the start, even when searching for candidates at all levels in interviews, we tell them it’s a fundamental part of the role. It does require you to occasionally translate to the partners, especially because they aren’t necessarily used to working in this way.

“One partner recently said to me, ‘your job titles don’t mean anything to me’. They weren’t being hostile, they were just expressing that they genuinely didn’t understand the difference in job titles and what to expect from each person in those roles.

“We got into quite a good conversation and I explained to them that a senior manager, for example, wasn’t somebody who just sat there and told everybody else what to do.

“I drew a parallel with the associates and said, ‘Look, senior managers are probably an eight/nine year associate, or equivalent.  Then you have a manager who is a four or five year associate, a coordinator might be a two or three year junior lawyer equivalent. And you know, your assistant is the attorney straight out of law school.’

“When you start talking in those kinds of ways, you could see the recognition, and then there was a reflection and understanding of the expectations.  As opposed to seeing all the individuals as fungible.”

What about winning pitches? What’s the culture like around those?

“We track through InterAction where we have done pitches or proposals or submissions of credentials and things like that. I’m not 100% convinced that it captures everything. It’s not everything the function is doing, let alone what the partners are doing in terms of pitch approaches and outreach. And therefore, the win/loss rate is hard to read, because you can’t be sure of the accuracy.

“We deeply believe that it’s easier to secure work from existing clients than it is out of new ones. Client development, and subsequent client growth, by definition, is a team sport, because it requires individual partners to be comfortable with referring their colleagues to what they will still perceive as their clients. And for there to be the appropriate mechanisms in place to encourage that to happen.”

And are you involved ahead of pitching? Do they ask if you think it’s the right kind of opportunity for us to go for today?

“It’s much better, as we all know, to be much more targeted and focused on the clients who we already have relationships with. It is an ongoing discussion, thinking process, and the more information you can bring to the table, in order to substantiate that discussion around which pieces of work are worth pitching for, the easier that go/no go conversation starts to become, because actually, it’s got to be evidence led.

“If it’s not evidence led with decent data, then it is one opinion versus someone else’s. And you know, opinions are very cheap. So, data is something which helps understand the picture and then can become part of a decision-making process. And that’s where you then start to really get into ‘no go’ type discussions.”

If I were to ask a member of your team about your philosophy, what would they tell me?

“I would hope that they would say we agree the direction of travel, or work with them to establish a direction, but then let them work out the journey themselves. I’m not one of those hands-on, micromanaging CMOs. My view is, if you’ve reached the position of senior manager or director, you should be capable of running your part of the boat.

“The work I’ll be doing is around direction, asking if we’re being consistent, connecting the dots between the practice groups and then working collaboratively together with those more senior members of the team. It’s about asking what we are doing as a function, what we are doing around our structure and infrastructure, the systems and information we have so that we can deliver a consistent service to the partnership.

“And I think it’s important to add whatever experience I can bring to the table from other firms, and just having been around a long time.”

The time talking to Chris has flown by and as I thank Chris for his words of wisdom and willingness to share. He’s clearly a man with a plan and I look forward to seeing where he takes Steptoe & Johnson in the months and years to come.