‘The out of the box thinker’, Sadie Baron 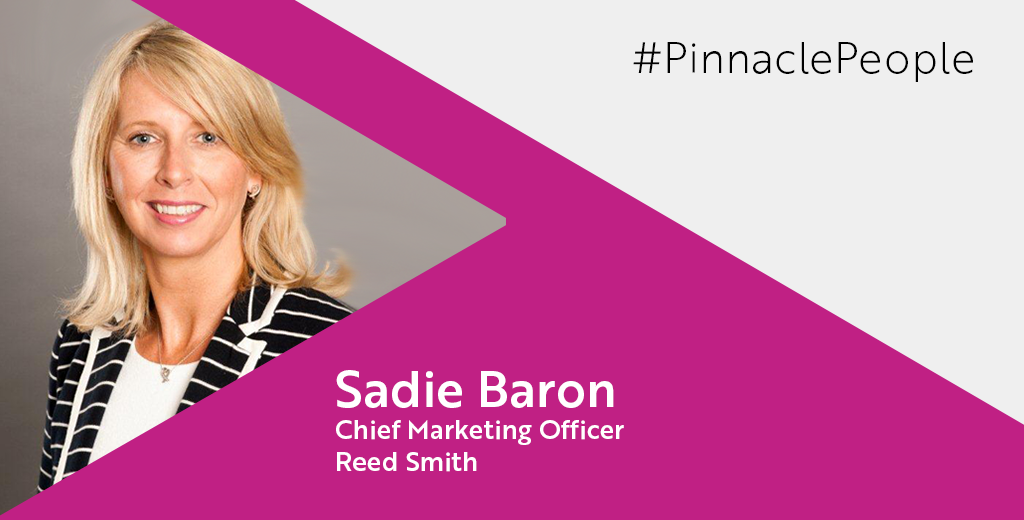 When I met Sadie Baron I was immediately in awe of her enthusiasm and off-the-scale creativity.

In fact, I can’t say I’ve come across many people like Sadie. She’s admirably authentic and firmly believes in hiring for attitude over experience. This approach has led her to unlock a whole new type of success for those she works with.

She sits infront of me today as a CMO of a major global firm with a vision that’s light years ahead of her competition.

We spoke about her ‘out of the box’ thinking and how as part of that she’s even sent those she works with to places like the Middle East or encouraged them to follow their interests and start a podcast. And she candidly shared with me how the pandemic affected her mental health, something that’s often brushed under the rug in the legal sector.

What do you do to make sure that your team has a diverse range of skills?

“I think we should foster the idea that we don’t put you in a box. That there are always opportunities for you to do other things. Don’t specialize too early is what I say to everybody that comes into the team. And I don’t need a law firm background, I just need the right attitude. I hire for attitude all the time, because I can train everything else.

“I’m always pushing the team to try things before committing. I’ve got a good track of putting all sorts of people into weird roles. For example, my Events Manager in London wanted to travel and I said, “How about going around the Middle East doing  Regional Marketing for me?” She didn’t have any BD skills, and learnt on the job. And she was brilliant at it, absolutely brilliant!

“I love people being curious. I’ve had people come to me and say, “Can I do a change management course?” And I’ll say, “Absolutely, of course you can!” And sure enough, those skills come out to play, because they’re just really solid skills that make people better all-rounders, which leads to lots of secondment opportunities.

“I’ve even sent people from the US to Germany because they had language skills, and they wanted to explore that language because they’ve grown up in Germany and haven’t been there since they were children.

“Once you get to manager and above, then we start investing in you wherever you are. We do particular communication courses for people who are in corporate comms, and we’re constantly building our digital skills. One of our team has become a podcast editor because we encouraged her to pursue her interest.

“I think that that’s the way that you keep an engaged team in what is a huge, usually competitive market now.”

Is there a difference between how people are able to coach partners in the UK versus the USA? Is there still a disparity that you’ve got to address?

“It’s a great opportunity for those of us that have tried to stay ahead. And it’s really competitive, we’re all trying to outdo each other. So we’re all pushing each other as a community all the time to come up with the best campaign, the best approach to market. We don’t just want to do the same old tired stuff that I see done day in day out elsewhere.

“We’ve earned our stripes with the rainmakers – the partners that get the biggest opportunities – and they will involve us in the pitch rehearsal. They reach out to us for ideas, and we work really closely with our pricing team as well.

“I’ve got a veteran of a pitch person in the US. I mean, she’s ex Big 4: she’s seen it, done it, heard it. She’s really good. She’s done really good sales training, and she doesn’t suffer fools gladly!  Sometimes partners are reluctant to work with her because she will push back, so then I just put her in behind whoever is leading instead. You know, it’s a bit tactical at times but you have to be to get the best results.

“Here in the UK, to be honest with you, we don’t have to do that so much. Asia is different again, we need to be culturally aware and sensitive. Sometimes, creativity is not needed and instead, it is all about the price and the team. They want the experience and will qualify it with you directory rankings. If that is all they’re after, then there’s no point in trying to do anything more with them.”

From expanding ESG teams to hours of pro bono work, firms are pushing their credentials as the competition for clients and young talent intensifies. I’ve often thought about how greenwashing is impacting law firms, and if it’s possible that it can actually be the first step towards a more conscious approach, I get Sadie’s thoughts on this.

Law firms are increasingly being accused of greenwashing. Do you think that’s right or fair?

“I don’t think there’s enough support and education around ESG for marketing individuals. And I’m not just talking about within law firms. People don’t know what they don’t know, and they don’t know how far to go. And it’s very easy to go too far too quickly. True greenwashing, some of the big corporations are very guilty of that. But when it comes to getting it slightly wrong, in my world, I don’t think we’re greenwashing.

“As such, I think we’re just maybe getting ahead of ourselves. And I don’t think it’s going to be long before a firm is called out by a journalist for putting themselves in the space of being ESG friendly, and then not having sustainability policies, not doing waste management, etc. And I’m not sure that is really fair.

“Like many firms, we’re carbon offsetting for the first time ever for an event which is coming up, and it’s a significant investment we are making. We’ve used our in house experts to give us the right advice just as we would if a client came to us and asked us about how to do it. And we’ve budgeted to do that because it’s a step in the right direction. It’s not the only solution and we can and will do more, but it’s a step in the right direction.”

What are you passionate about, outside your role as CMO?

“Last summer I felt like I wanted to give something back. So I decided to train as an Appropriate Adult.  I go into police custody centers for when people are deemed vulnerable – either because they are a juvenile, or a vulnerable adult with learning disabilities, or have mental health issues or drug and alcohol dependency. And I sit in on the interviews with the police to make sure that their rights are being upheld.

“I find it fascinating. My listening skills have really, really improved. Just taking that moment to stop. It also gave me the most phenomenal training in mental health issues and a deeper awareness of what can be going on with people. And you know what, I get the greatest kick out of it because I’m genuinely helping someone who needs it at a time that’s really stressful and difficult for them. And even in the direst situations, everyone is so polite to you.”

Tell me more about how an awareness of mental health fits into the firm.

“I won’t lie, the past 18 months have been tough. Being a CMO of a really big firm, with all these partners that bring their own challenges to the role, can be hard at the best of times.

“But it’s been really hard during the pandemic. I’ve been very open about the fact I’ve struggled, especially at the beginning of the pandemic when I had to make some really difficult decisions about putting people on furlough and potentially redundancies – which we managed to avoid thankfully. It’s taken its toll on me.

“I was heading into a very dark place, and I needed to go and get some help. And I did, and I shared it with the team. And when I shared it with them a lot of people came up to me afterwards and said, ‘Thank you so much for being so open and showing your vulnerability.’  And it just made me realize that I need a bit more of that in my life. Because this job is all-consuming. So for five hours, once a week, I put myself on call over a weekend usually in the evenings. And yeah, I think it makes me a better person. It makes me feel like I’m giving something back.”

After speaking with Sadie I’m warmed by her humanity. It’s not often people share their vulnerabilities, but there’s a real strength to that and I leave our chat feeling both inspired and moved.